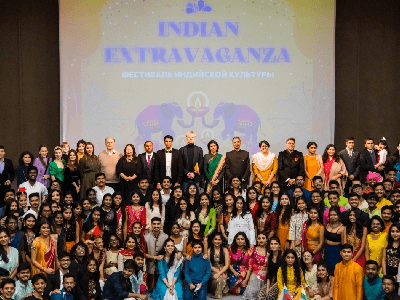 The Indian Extravaganza also witnessed the presence of prominent delegates and senior officers from the Indian Navy in Kaliningrad along with their families.

Sharing his thoughts on the success of Indian Extravaganza, Dr. Sergey said, "A.K.Educational Consultants are official representatives of Immanuel Kant Baltic Federal University, Russia in India. We are extremely delighted to welcome the new batch of students recruited by Dr.Amit Kamle. They are motivated, studious and hard-working. Dr.Amit Kamle's students have brought great joy and warmth in Kaliningrad during Russian winters. We are delighted to witness this amazing event.”

During Indian Extravaganza all the final year MBBS students who will graduate in 2023 from the University, were felicitated by A.K.Educational Consultants.

Back
Yes, I want to Talk!